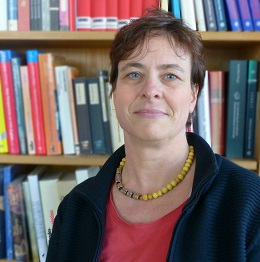 Bettina Migge is Professor of Linguistics in the UCD School of Languages, Cultures and Linguistics and has been its Head of School since 2016. She previously served as Interim Director of the UCD Applied Language Centre (2012-1013) and was Head of Linguistics at UCD. She studied at the Universität Hamburg, Université de Cameroun (Yaoundé), Freie Universität Berlin and The Ohio State University (Columbus, OH). She holds an MA and a PhD in Linguistics form the Ohio State University. For her PhD research, which investigated the role of African languages in creole genesis, she carried out more than one year of field research primarily among the Pamaka Maroons in Suriname, South America, and spent a total of six months in Bénin, West Africa. Following her PhD, she worked for six years at the Institut für England und Amerikastudien, Abteilung Linguistik, at the Johann Wolfgang Goethe Universität, Frankfurt am Main. Since 2004 she has been employed in Linguistics at University College Dublin.

While her initial research was primarily concerned with diachronic language contact and creole genesis, she has since specialized in researching synchronic language contact. She investigates language change in multilingual contexts experiencing rapid social changes such as urbanisation and migration. Her research has focused on exploring both structural and socio-pragmatic aspects of language in French Guiana, Suriname and Ireland. Her work has focused on promoting the role of sociolinguistic methods and approaches in synchronic language contact research and more recently also in language documentation. Empirically, she has focused on lesser-used languages, specifically the Creoles of Suriname and French Guiana (Pamaka, Ndyuka ((Busi)nenge(e) Tongo or Eastern Maroon Creoles) and Matawai), Irish English and the Gbe languages of Bénin. Her research has been funded by the National Science Foundation (USA), various projects based at the French research unit SeDyL, UCD Seed Funding, IRCHSS, IRC, Ulysses grants and a tender from Immigrant Council Ireland. Since 2013 she has been involved in a participatory trilingual dictionary project in French Guiana for Businenge(e) Tongo / Eastern Maroon Creoles (preliminary access: https://corporan.huma-num.fr/Lexiques/dicoNengee.html) which has also led her to reflect on the significance of language technologies. She supervises students in the sociolinguistics of Irish English, linguistic landscaping, computer-mediated language use and World Englishes research.

Since October 2020, she is member of the COST action LITHME (Language in the Human Machine Era: www.lithme.eu ) where she explores together with people from all over Europe and beyond how technologies and our interaction and perceptions with them affect language practices and language change. She is also a member of the Committee of the Study of Language, Literature, Culture and Communication of the Royal Irish Academy and President elect of the Society for Pidgin and Creole Linguistics. Since 2021 she is Associate Editor of the Journal of Pidgin and Creole Languages.

This website uses cookies to improve your experience while you navigate through the website. Out of these, the cookies that are categorized as necessary are stored on your browser as they are essential for the working of basic functionalities of the website. We also use third-party cookies that help us analyze and understand how you use this website. These cookies will be stored in your browser only with your consent. You also have the option to opt-out of these cookies. But opting out of some of these cookies may affect your browsing experience.
Necessary Always Enabled
Necessary cookies are absolutely essential for the website to function properly. These cookies ensure basic functionalities and security features of the website, anonymously.
Functional
Functional cookies help to perform certain functionalities like sharing the content of the website on social media platforms, collect feedbacks, and other third-party features.
Performance
Performance cookies are used to understand and analyze the key performance indexes of the website which helps in delivering a better user experience for the visitors.
Analytics
Analytical cookies are used to understand how visitors interact with the website. These cookies help provide information on metrics the number of visitors, bounce rate, traffic source, etc.
Advertisement
Advertisement cookies are used to provide visitors with relevant ads and marketing campaigns. These cookies track visitors across websites and collect information to provide customized ads.
Others
Other uncategorized cookies are those that are being analyzed and have not been classified into a category as yet.
SAVE & ACCEPT